Built in 1899 and owned and captained by Johannes Muller until 1920, Albatros was initially a North Sea Klipper operating from South Holland on the North Sea. Between 1920 and 1978 she had various owners who installed an engine. Her rigging was reduced in the 1960s.

In 1980 Albatros was bought by Antonius ‘Ton’ Brouwer. She was taken from where she lay in Copenhagen to her new home in Amsterdam. There she was recommissioned as a sailing vessel and began to operate once again on the North Sea.

From 1987 to 1996 Albatros regularly traded between the UK and The Netherlands and became well-known at Wells-next-the-Sea where she would often unload soya beans, around 100 tonnes per trip. She would also transport corn, phosphates and timber, regularly travelling over 20’000 nautical miles per year and docking at ports all over Northwest Europe.

In 1996 the ship stopped sailing cargo. It was the end of a 98 year career as a freight carrier in the North Sea.

Between 1997 and 1998 she was recommissioned again as a passenger vessel and in 2008 she became a full-time restaurant and bar at Wells-next-the-Sea, where Ton Brouwer served authentic Dutch pancakes and other Dutch specialities.

In 2000, Albatros was officially invited to join ‘SAIL Amsterdam’, an event which sees Tall Ships from all over the world moor in Amsterdam’s eastern harbour.

Recently sold, Albaros is currently undergoing restoration and a refit in Maldon, Essex by the Marine Heritage Foundation. Crewed by her new owners and former owner, she made her way south in August 2020 and is expected to remain in Maldon until 2022.

The type of vessel to operate this route is crucial. A full sized clipper, for example, with their lofty square rig and deep draft would not be suitable to sail a short route, they are designed for deep-sea voyages and fast trade winds.

North Sea routes would be better served by smaller sailing vessels, like Albatros, with a simpler fore and aft rig, and a shallower draft. These vessels could utilise this route well, making around 50 trips annually.

In the future, this shipping line should see a host of different sailing vessels to, once more, offer the option of emission free travel and transport across the North Sea. 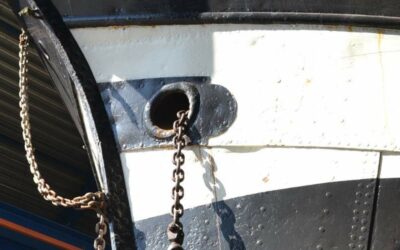 The latest from De Tukker refit at Talsma Shipyard. 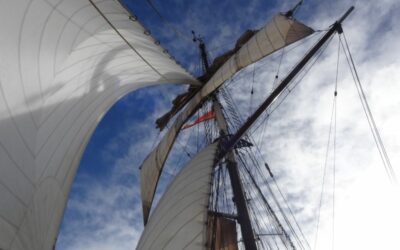 EcoClipper: A Journey into the Wind

The sail cargo and passenger industry has been growing as sustainable brokers and sail cargo companies have thrown their hats into the limitless wind, and in 2018 Jorne Langelaan started EcoClipper with a vision.