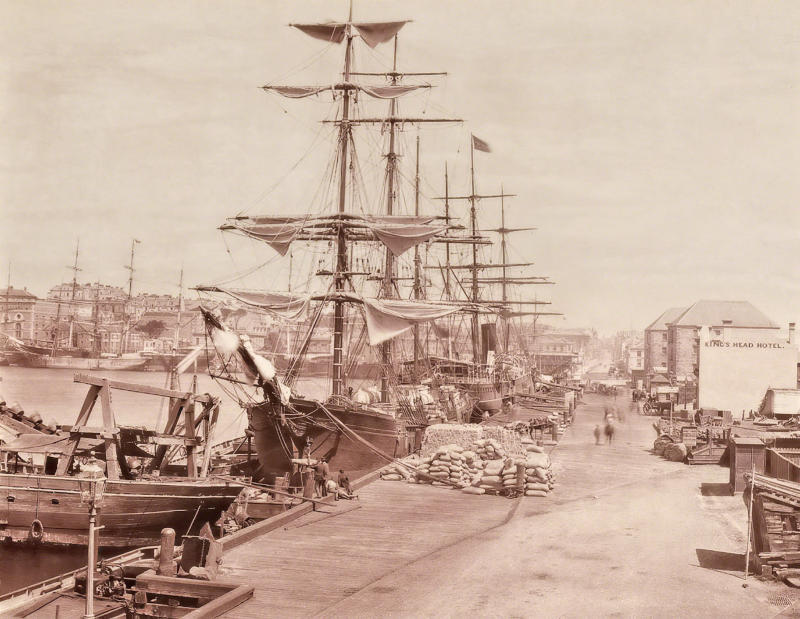 The wind-powered ship remains in essence what it has always been, a ship dependent on a favorable breeze and an experienced crew. Prevailing wind patterns are used to dictate sailing directions and routing, allowing access to certain ports and safe harbors as well as lee-shores to avoid. Shipyards and trading centers once grew out of natural deep-water harbors which allowed shelter from the wind and swell found on the open ocean. Proximity to inland waterways was a factor in where a port facility would develop as cargos of wares would be reloaded onto smaller coastal craft for more localized distribution.

A port in the age of sail would most certainly include an entire community full of tradesmen and workers able to support the needs of the ship-owners and Masters. Indeed, the entire port facility would be lined with warehouses, ship chandleries, sail-maker lofts, rigging lofts, blacksmiths, joinery and wood carver’s shops and anything else having to do with the nautical trades. Ship agents, Merchants and Insurers would fill coffee-shops, sometimes within sight of ship-yards and their rows of vessels in various states of construction. The streets and alleys would be filled with sailors from all corners of the world and many different cultures and creeds could be observed. This paints quite a picture, albeit an incomplete one.

Motor ships can operate outside the parameters of favorable sailing conditions and can steam in any direction, making the location of a modern port terminal more of a logistical consideration with access to rail and road being an important factor rather than providing a safe anchorage for a fleet of sailing ships. The locations of modern ports tend to be just outside major city centers allowing for expansion and support, although at the point where the city and port facilities have grown to meet, extensions are no longer possible and support from road and rail feeder lines become curtailed.

The amount of logistics needed to operate a modern port or container terminal is reaching a certain limit as there becomes less space to allow train and road feeder transport for the immense cargos. Cargo ships are built with maximized proportions to allow passage through certain sea-ways but put massive pressure on shore facilities and surrounding communities during the charging and discharging of freight. Harbors, rivers and sea-ways often need to be widened and deepened to allow these ultra-large ships to navigate which disturbs local natural eco-systems and destroys the habitats of hundreds of marine species. Since a port can will also grow landwards this creates the problem of exponential growth given a limited amount of space. Once alongside and before a ship can off-load, the support net requires thousands of trucks and dozens of freight trains to redistribute the cargo inland. The accessibility to a port becomes hindered when the outlying perimeters have reached areas designated for residential and other commercial sectors.

A cause of this problem is that while some ports reach their limit for expansion, such as many small and medium sized European ports have, others have not. In the far east, where most of the world’s largest port facilities are located, ships are built to maximize cargo capacity since the infrastructure of land support has been designed to handle the strain. When these ships arrive at a smaller port in the west for dis-charging, the logistics become increasingly hard to organize. This would seem to indicate a limit to the size of ships able to proceed with international trade but still larger ships are being ordered by many shipping companies globally.

Will it be necessary for a sailing cargo ship, of the type we are promoting, to call at modern ports and terminals for charging and discharging freight? Obviously, a ship can be towed into any berth with enough space in a busy port with considerations for rig clearance and height of the quayside.

The main defining features of an appropriate port of call for a sailing cargo ship will be a sheltered harbor with good anchoring grounds and inroads for freight distribution. A sheltered bay on a coast-line near port facilities would allow a sailing ship to navigate easily to station for towage or even an anchorage to wait for custom’s clearance and docking instructions. This would allow a true sailing ship to avoid maneuvering in narrow or shallow sea-ways up to a port used for modern commercial vessels.

The possibilities for sustainable coastal cargo distribution are apparent and indeed the EcoClipper project promotes the so-called Spoke and Hub model of maritime shipping. Many smaller sailing ships could be employed in the coastal cargo trade, allowing freight amalgamation in warehouses. Cargo designated for Trans-oceanic transport would be loaded onto our larger clipper ships and traded internationally. Our ships will be fitted with their own cargo lifting equipment in such a way to allow a swift turn-around. The pallets, sack and barrel type cargos will have many possibilities to allow for sustainable transport to and from loading docks after reaching the final destination.

There are many deep-water natural harbors in the world, that were once filled with sailing ships riding anchor, that will prove appropriate for wind ships once again. Time will tell where trade takes the EcoClipper ships but there is certainly no shortage of good well-positioned ports and perhaps we will see the sea-port of old with all the nautical trades represented and in support of commercial sailing cargo ships.