The EcoClipper500 will be a purpose-built clipper ship, used for shipping cargo, sail training and passenger travel. The aim is to create a vessel which is completely independent from fossil fuels. Is this possible? For sailing, yes! The EcoClipper500 will not have an engine, and will just use the power of the wind. However, this means that generating power on-board is a very interesting and specific discussion. How do you balance the needs of the passengers, of the ship and of the cargo on a carbon-neutral ship? 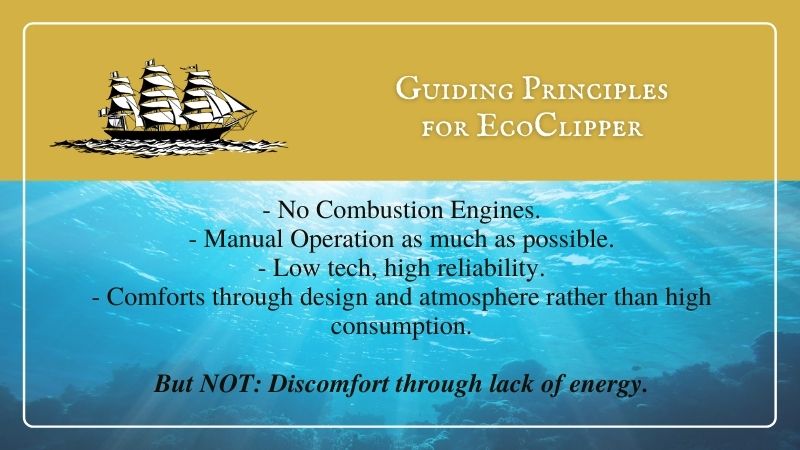 EcoClipper recently gathered experts from across the maritime sector to discuss how to sustainably generate power for everything aboard all EcoClipper 500 ships; from safety equipment such as radars to heating for passengers. Andrew Simons, the technical coordinator of EcoClipper and founder of Saillink, presented the meeting and was joined by:

The EcoClipper vessel design will reduce consumption as much as possible. This will be done via the careful planning of technical systems, the management of those systems whilst on passage and the culture on board conveying an efficient use of resources and minimisation of waste. All those on board will need to understand that resources are sufficient but limited. 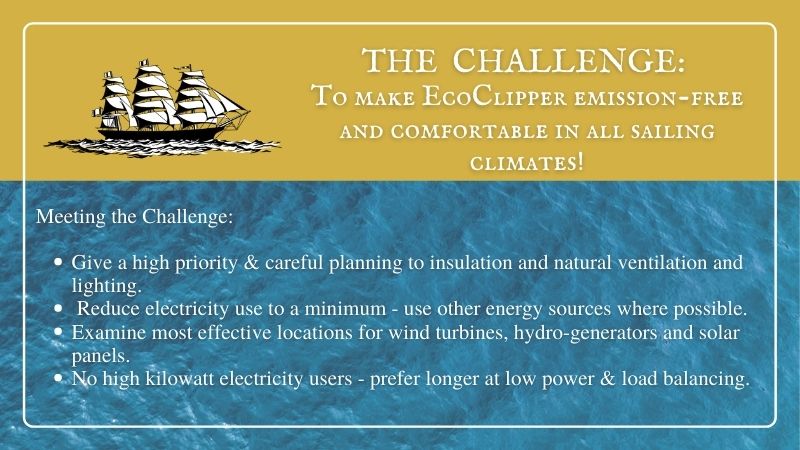 The Discussion – What consumes the most energy on board a ship?

At the start of the discussion, it was agreed that talking through the challenges of building a ship like the EcoClipper 500 and subsequently discussing the interesting innovations and solutions to them, is vital at this stage of the design process, prior to construction. It is also important to fully analyse all possible options at this stage, to ensure maximum sustainability in the future.

First of all and perhaps the most critical are the ship demands. These include navigation and maintenance. The ship’s crew will use traditional navigation techniques combined with modern innovation to ensure the ship sails safely. In busy shipping lanes, it is important that navigation systems such as radars have a constant reliable power supply.

Some participants brought up a discussion surrounding meeting SOLAS and other legislation requirements. More research is being done into this area but it is believed that the EcoClipper prototype would fall under a special purpose class ship/traditional vessel which also falls under the requirement of being up to 500 gross tonnes. It was commented that there may need to be an emergency generator on board to meet requirements, from the class and flag states, and this is something that the EcoClipper Team are looking at. Marijke de Jong mentioned that the IMO and many classification societies are now working on WASP (Wind Assisted Ship Propulsion) so there is a lot going to change in the future. Also, Kris de Decker said, “it is good to challenge the rules, not just in sailing but in everything, often it is the rules that are the problem.”

Eric Kesteloo commented that “it may be easier to keep things simple and focus on all-electric power sources because electric systems are already required for navigation equipment and other ship demands.” Also Mienco Dijkstra mentioned that if the vessel relies on electric power, this can be gained from shore whilst in port but there would still be a need to look into storage solutions.

There were also comments that the ambition with this vessel prototype is very high but it’s success will pave the way for future development of more sail cargo ships and better regulations surrounding them.

Another demand is the cargo onboard the vessel, considerations need to be made in regards to handling and climatisation. If the team decides to have refrigeration onboard for heat-sensitive cargos it will use a lot of energy.

Depending on the cargo that the EcoClipper ship is carrying there may be a requirement for refrigerant systems, especially whilst transiting tropical regions. These draw fairly large amounts of power and require a constant supply. One option brought up by participants was to simply not carry these cargoes. This would mean that certain cargoes would not be able to be transported, which is not ideal, as EcoClipper aims to encourage more general movement of cargoes by sailing ship. On the other hand, it was discussed that good insulation may be enough for most cargo.

Last but not least, there will also be hospitality demands as the ship is carrying trainees and passengers.

Ensuring that there is a comfortable atmosphere onboard the EcoClipper prototype is a high priority. Jorne Langelaan voiced his preference to use wood for the interior. The discussion then led to sustainability of the wood and the concern that wooden interiors can be seen as a fire hazard. It was also discussed that the gas produced by a biodigester could potentially be used as fuel for the cooker onboard. Biodigesters are a great way to use waste water and other waste products and, as far as we know, have not been used on a sailing ship before. (Have a further read of this innovative technology below in the Potential Solutions section!)

Furthermore, Harry Muter and others commented that the “lack of a generator brings the comfort of silence”. This is a rare benefit for a passenger vessel, allowing passengers and trainees to fully experience the sounds of the sea. Kris de Decker also stated that one of the top priorities should be to reduce energy consumption onboard, such as installation of mist showers onboard which consume 5-6 times less water and energy.

As a sailing vessel, the EcoClipper prototype will be already using wind power for propulsion but there is potential for additional wind turbines to generate energy. There are a few options for wind power placement: on deck, in rig or on stern. The diagram below shows the locations in consideration. Also, some participants of the brainstorm brought up the idea of the kite off the bow of the vessel to harness additional wind power. The issues with wind power arise from the lines, possible sheltering from sails, noise, safety, pendulum forces, the boom and the potential visual impact. 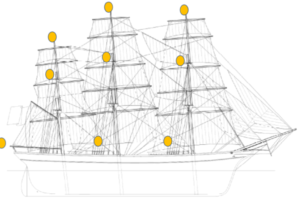 Solar panels are a great source of energy in times of low wind. The trade routes that the EcoClipper team has identified, mean that the vessels will be transiting through tropical regions where solar power is of abundance. However, the main issue is where they could be placed on the EcoClipper ship without shadowing, where they could be stored and the potential for saltwater ingress.

Hydro-generators are already in use onboard many yachts and smaller sailing vessels. This would use the power of the water to generate energy for batteries. This could take the form of a fixed installation or could be towed/dropped down. However, there are internal space requirements and questions surrounding effectiveness and vulnerability, as well as the visual impact.

Mienco Dijkstra mentioned that he believes hydropower to be the most efficient resource and as many hydrogenerators should be placed on the prototype as possible. Furthermore, Marijke de Jong mentioned that it would be great to harness the immense amount of energy from waves in some way.

Whilst sailing along the trade routes, the conditions should provide constant power via wind turbines. However, solar electricity is far more intermittent and the vessel must be prepared for occasions of fog with no wind. During these periods life on board will continue and power for the essential navigation equipment must also be maintained. Batteries are therefore essential as they store energy collected previously from the wind-turbines, solar panels or hydro-generators. The EcoClipper team is currently assessing the viability of using “saltwater” batteries as an environmentally unproblematic and inherently safe solution. This is innovative technology for a sailing ship like the EcoClipper 500 and has not been used onboard a sailing ship before.

The principle behind biodigesters is the anaerobic digestion of all organic waste and waste-water and the use of the biogas for cooking or water heating. In principle, the gas produced would be in direct relation to the number of people on board and so provide a very symbiotic system. As a waste-treatment plant it would also reduce the need for sewage holding tanks whilst ensuring that discharges overboard would be of greywater and free from chemicals.

Eric Kesteloo, Captain of the Bark Europa, mentioned that with 55 people onboard they generated around 40 litres of galley waste a day. This is similar to the number of people the EcoClipper Ship would carry at near maximum capacity. The biodigester would process this and all other wastewater flows. Furthermore, Bart Stolk commented, ‘Biodigester is very interesting… They are mostly used in static situations on land… so wondering if it will still work in the dynamic shipboard environment.’ Andrew Simons stated that biodigesters require a mixer and therefore could work well with rolling seas. Biodigesters are now widely used on land but (to our knowledge) have never been used on a sailing ship before. So the question is then how it would meet regulations when there are no regulations!

One of the key components to ensure that the EcoClipper vessel meets the sustainability challenge was ensuring that insulation is carefully planned out and effective. The specific environment and conditions of a ship place very critical requirements on the insulation and how it is installed. On top of this are very strict fire regulations. There are therefore very few insulation materials which come into question as being suitable. When sustainability criteria are added then one is really faced with conflicting principles. Mineral wool is the standard solution fitting the technical requirements although is not so sustainable to produce. Marijke de Jong and Jess Clay suggested that sheeps wool should be taken under consideration as a sustainable alternative that often goes to waste. Marijke also mentioned that a ship she had sailed on was insulated with sheeps wool and she will discuss with the shipowner that process.

Finally, as a last resort the EcoClipper must look to the human power on board as perhaps the most reliable form of emergency energy, and arguably not only in times of crisis. For example, having a static bicycle that crew, trainees and passengers can use to exercise hooked up to an alternator to produce electricity and it could provide a valuable contribution and awareness of the effort needed to generate electricity. Kris de Decker was the one to bring this up in discussion and mentioned that his apartment is partly human powered! There has been a lot of research into the benefits of exercise on mental and physical health, therefore it seems a clear option to harness this resource. However, it may not be possible to cycle in stormy seas!

Thank you for reading this blog! If you have any thoughts on this area or feel as though you have the perfect idea for EcoClipper please reach out to us here.