Ships sail pretty much all year round, certainly they did in the Age of Sail. This means that crews are often celebrating their holidays on board. Last year, EcoClipper intern Karsten told of his experiences on board Tres Hombres in December and January. This year, we look to writers who also were at sea, to glimpse their celebrations at this time of year.

Newby dedicates a chapter in his book, The Last Grain Race, to ‘God Jul’ (Christmas). He was sailing onboard the four-masted barque Moshulu in 1938. Most of Newby’s crewmates were Scandinavian. At this point, they are sailing the Indian Ocean.

‘At last it was Saturday, December 24th, Christmas Eve. Christmas Eve was the principal Finnish celebration. It was our free watch in the morning, and now came the opportunity for the great ‘Vask’ [wash]… we put on our best clothes… In the splendor of our new robes we slept till noon. Then, except for wheel and look-out, work ceased for everyone.’

‘’Coffee-time’ brought the first fragments of a great avalanche of food. On Saturday’s the bread was always different; today it arrived in the form of scones. There were a great number, they were very good and we ate the lot in seven minutes.’

‘From the midships fo’c’sle [forecastle] came the sound of a Christmas hymn being sung rather well in Swedish and we all went to listen. The singers were seated with their backs to the bulkhead near the Christmas tree which ‘Doonkey’ [operator of the Donkey engine] had made from teased-out rope yarns. There were five of them sharing three hymn books and they all sang with great earnestness… I stood in darkness by the huge trunk of the mainmast… We were all very homesick.’

‘At nine o’clock we queued up outside the Captain’s stateroom to receive our Christmas presents… When it was my turn to enter the ‘Great Hall’ I felt very serf-like and nervous, but my premonitions were soon dispersed. Inside it was all red plush, banquette and brass rails… He held out a hat to me, full of pieces of paper. The one I took was Number 7… I wished everybody ‘God Jul’ and backed out of the stateroom in fine feudal fashion, stepping heavily on the toes of the man behind me, and dashed eagerly back to the fo’c’sle to open it.’

‘On Christmas morning the weather was cold and brilliant. Big following seas were charging up astern in endless succession. They surged beneath the ship, bearing her up, filling the air with whistling spray as their great heads tore out from under and ahead to leave her in a trough as black and polished as basalt except where, under the stern post, the angle of the rudder made the water bubble jade-green, as if from a spring… Rigid with cold I descended to eat Christmas dinner, for which the ‘Kock’ [cook] had made an extra-sustaining fruit soup… At 4.am. On what would have been Boxing Day in England we were setting royals once more. The party was over.’ 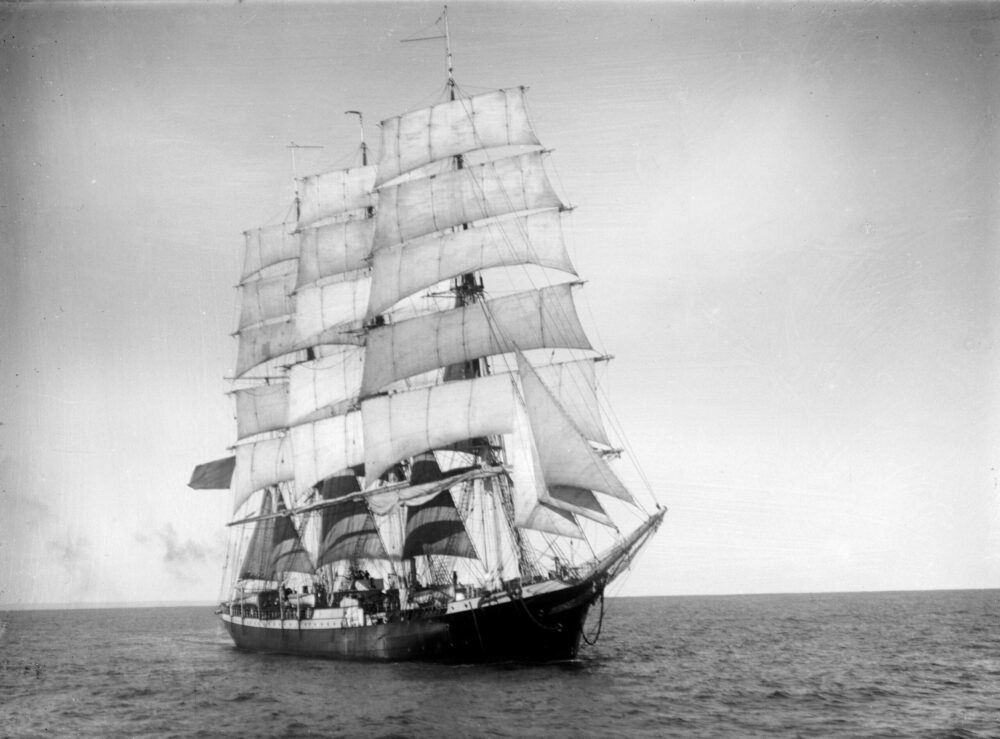 Annette Brock Davis was one of the few women who sailed as an apprentice on-board a windjammer in the early twentieth century. She wrote of her experiences aboard four-masted barque L’Avenir, in 1933. Unlike Newby’s experience, L’Avenir had passengers onboard too.

‘At Christmas, everyone was given a small tot of schnapps… [but this] did not prevent the ship from demanding service on Christmas Day. It came on to blow, so some of us spent most of the afternoon taking in the royals and t’gallants. The buntlines on the mizzen upper t’gallant broke, and it took a swift duck to avoid the danger as it slatted backwards over the yard.’

‘That evening, everyone dressed up. Even the sail room was transmuted. The Dutch lady stood in the centre, Santa Clause style, giving out presents from Holland to all. One couldn’t but admire her kindly forethought in laying in presents for the whole crew before we sailed so many months ago. It did help to make it seem like Christmas…’ 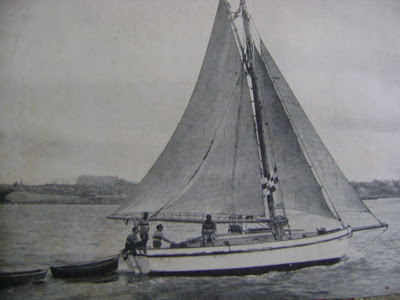 After being fired at the start of the Great Depression, Wray decided to follow his dream and build his own boat. He and friends took part in various races with his boat Ngataki.

‘The next morning dawned bleak, dismal and cold, and the prospect of poking one’s head up through the hatch was anything but inviting. It was the 24th December – Christmas Eve – and it looked as if we were going to spend our Christmas hove-to in a south-west gale about a hundred miles off the Australian coast. Possibly not very merry, but rather novel. I mean it is not everybody who spends Christmas thus.’

‘As the day wore on and conditions did not seem to get any better, we decided we could not let Christmas Eve pass like this… We had a supply of beer on board and a few bottles were produced. The crew settled down to celebrate Christmas Eve. After a hearty lunch, more bottles of afternoon tea were consumed and it was not long before the festive spirit of the season prevailed in the Ngataki… Vigorously the crew induled in what might loosely be described as community singing, to the accompaniment of a mandolin, swanee-whistles, and banging pot-lids… It was the true Christmas spirit.

Had a vessel passed us as we lay hove-to, her crew or passengers, on seeing us riding in the big seas, would probably have said to each other: “How terrible it must be to be cooped up in a little boat in such weather!” Little would they have dreamt of the scene prevailing below decks. The unfortunate watches cooped up in their little ship were having the time of their lives.’

‘… Buster (the best cook on board)… made a valiant attempt to cook us a sumptuous, five-course Christmas dinner. He made a great picture, whistling away in the galley, wearing a cook’s hat and covered from head to foot with flour – for a basin of flour, disregarding all the laws of gravity, had just leapt at him when the ship had taken a sudden lurch.

To produce a complicated dinner under these conditions requires juggling ability to a very high degree, for it is no mean feat to mix materials on a gyrating bench or cook on a stove where the pots show a distinct inclination to jump off when you’re not looking…

These passages remind us of the importance of traditions, memories and looking after wellbeing onboard sailing vessels. Breaks from routine are vital and something EcoClipper would be very aware of when planning long voyages.

Wherever you are in the world – be it onboard a ship or on land – we hope you have an enjoyable festive period.