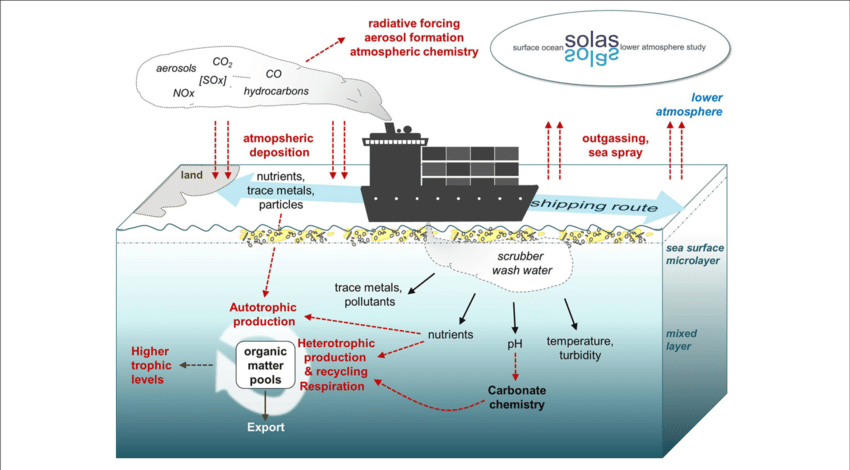 Since January 1st 2020, all ships at sea have had a limit on the sulphur content of the fuel they burn. This regulation was put in place by the IMO (International Maritime Organisation) and it reduced the allowable sulphur content from 3.5% to 0.5%. This is impactful legislation as the large merchant vessels that carry freight around the world non-stop tend to burn a fuel called HFO (heavy fuel oil). HFO is used because its cheap, and its cheap because its dirty. It is a remnant of the fractional distillation of crude oil, meaning it contains a variety of contaminants that are subsequently released into the atmosphere when burnt. Sulphur is one of these contaminants and when released can contribute to respiratory illness, aggravate heart and lung conditions, contribute to smog and cause acid rain. [1] This legislation therefore forces a substantial cut and is definitely a step in the right direction for reducing shippings impact of the environment. To put it into context, a quote from the IMO website:

A study on the human health impacts of SOx emissions from ships, submitted to IMO’s Marine Environment Protection Committee (MEPC) in 2016 by Finland, estimated that by not reducing the SOx limit for ships from 2020, the air pollution from ships would contribute to more than 570,000 additional premature deaths worldwide between 2020-2025. [2]

This shows the utility of this new legislation, but also makes one wonder as to how many premature deaths have been caused since HFO became the favourite fuel of shipping 60 years ago…

Anyway. Unfortunately, this new rule has a catch. It allows ships to continue burning sulphurous fuels, as long as they are fitted with something called a ’scrubber’.  This is a device that filters a ship’s exhaust, removing a large part of the contaminants released into the atmosphere. What it then does with them though is the motivation for this essay.

It puts them into the ocean.

Now, the oceans provide critical climate regulation to our planet. Over the last 200 years they have absorbed 38% of the carbon we have released by burning fossil fuels whilst producing 50% of the oxygen in the atmosphere [3]. The systems that have allowed this to happen are powered by the life within it. Phytoplanktons for example photosynthesise like plants, sending carbon as organic compounds into aquatic food webs and most often into the deep sea, where it can take millions of years to arrive back at the surface. The details of processes like these however remain mysterious, it is widely held that we know more about the surface of the moon than we do about the deep sea.

By redirecting our pollution from the atmosphere to the sea we are giving ourselves clearer air to breathe, but poisoning the life that makes that air breathable. We have already seen a rise in the acidification of the oceans, caused by the burden of our emissions. This has caused huge damage to its ecosystems, significantly the death of coral reefs around the world [4]. Now may be a good time to point out that the sulphur released into the sea from scrubbers is released as sulphuric acid. A quote from the German environment agency (bracketed words are my own):

“The use of scrubbers causes environmental degradation through short-term and spatially limited pH value reduction (increase in acidity), increase in temperature and turbidity (water less transparent, decreasing phytoplankton’s ability to photosynthesise) as well as pollutant discharge of sometimes persistent materials.” [5]

In fact it gets worse. Not only does this exemption mean that ships can continue to burn HFO, it actually means that they will use more. For decades there have been emissions restrictions in certain areas, which has meant that ships have had to use cleaner fuel to travel through them. The increase in cost of using cleaner fuel while passing through however was less the cost of the scrubber installations, so ships just switched fuels when necessary, polluting less in the process. With the new legislation however it is now more cost effective to install a scrubber and not have to switch fuels at all. Maersk, the largest shipping company in the world for example, are set to increase their HFO use by 150% [6]. With the scrubbers installed the increased amount of pollutants produced will not go into our air, but they will pile into the sea instead.

Now, to someone who is concerned about how humans are impacting the planet, all the above is very depressing. The debates surrounding alternative fuels, scrubbers and their relative emissions read like perverse ethical dilemmas with all options resulting in planetary death. It is clear, to me at least, that the only way to responsibly deal with emissions is to not emit them in the first place. By trying to find different places to put them, we are wasting time and avoiding the actual problem.

Do not despair. There is a solution to shipping’s pollution problem that still allows ships to sail and is ready to be implemented now.

By filling their sails, wind has provided seafarers with cost and emission free energy for thousands of years. It is the solution that is right under our noses, perhaps obscured by sulphurous smog. It is a hugely direct way of harnessing power from the natural world and the cost is only that of the sails or kites used to capture it. The power of the wind, albeit to generate electricity, is being realised on land. Cumulative wind capacity around the world increased from 24,000 megawatts to more than 530,000 megawatts between 2001 and 2017 [7].

It circumvents the need to pump pollutants into the atmosphere, or the oceans.

It has no impact on sea life in the form of noise pollution, unlike motor vessels, allowing it to continue sustaining and nourishing us.

The adoption of wind powered vessels however comes with a compromise. Weather conditions have to be factored into routes, resulting in longer and less predictable travel times. It would also require that we transport less. As the shipping world has not been paying its environmental bill, it has been able to provide extremely low prices, often making it cheaper to import from afar than use local goods. When the environment is factored in, unfortunately, shipping will get more expensive. This has been discussed in an earlier blog post so I will not go too far here. What I will say though is that when compared with the compromise involved with not using it, i.e. not having a liveable planet, it seems like a small price to pay.