The square-rigged sailing ship has evolved slowly over thousands of years. Every major innovation came after a long period of trial and error which would illuminate certain necessities and point to areas of the ships due for improvement. In the past, various building and rigging methods would appear on water craft due to its area of operation and local climate.

Performance, strength, available materials and traditional methods were factors on how sea-faring cultures built and rigged their vessels. Over time, cross-fertilization of boat-building and rigging techniques passed between trading partners as foreign going ships would visit distant ports. After installation of many of these improvements in equipment and familiarization of their functions, it would have seemed archaic that ships and sailors went so long without them.

It is noteworthy to imagine that each new change to a ship’s design would be met by opposition, sailors trained in their expertise to work a ship “as they were” and masters and ship-owners who welcomed the newer technology as a method to increase safety onboard and reduce costs. We can endeavor to look back at a few of the more effective upgrades, that now seem so sensible but most likely at the time were regarded as revolutionary, and how they accumulated into the perfect sea-going vehicle before they met their end at the hands of the internal-combustion engine and a strategically placed canal.

History reveals that the starting point for sailing craft was the single square-shaped sail, bent on a yard which could be trimmed angularly in relation to the keel and set on a single mast or pole-framed structure.

The mast would be mostly un-stayed but supported while underway by the halyard which would be led aft. When the sail was doused the halyard was simply eased out to lower the entire yard and sail down to the deck.

In some cultures, the mast itself could be hinged backwards until it rested in a cradle. As the size of ships increased, so too did the sail and became too large to handle easily. The area of the sail was therefore made adjustable by adding or subtracting a separate lower section called the bonnet. 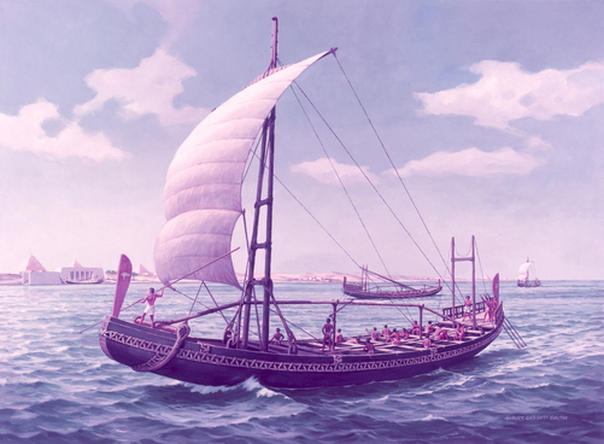 Obviously, the number of rig components that were added to the original single-mast, single-sail boat are too numerous to mention in a single article. Everything from back-stays to footropes to reef-points would have been added due to an increased awareness of functionality and performance.

To achieve more sail area the height of the masts had to be increased. This was done by stepping or overlapping a second lighter mast above the lower which would support an additional yard and square-sail, the topsail. Eventually Topgallants, Spritsails and later staysails were added but overall took centuries to develop and would have been conceived after some need for more sails existed. 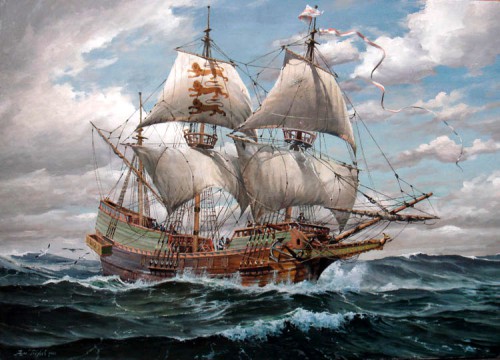 Material played an important role as a catalyst for maritime development. The scarcity of suitable ship-building lumber in Europe led to a revolution in ship construction with iron and steel a relatively abundant resource as the primary material used in ships. Shipyards were quickly altered to work with the newer material and designs for enormous ships made from the stronger material were drafted. The change was sensible as the need for bigger ships required entire forests to be cleared. An unsustainable practice leading to the nearly complete de-forestation of entire regions of the British Isles, mainland Europe and their colonies. The switch to steel happened within a generation or two as shipyards were re-organized, shipwrights re-trained, etc.

One of the most significant technological changes during this time was the split topsail. The split topsail is a perfect example of a welcome technological addition to the otherwise slowly developing square-rigger. It had many facets of economical and practical use. Where two sails took the place of a single much larger sail meant that sail-handling could be accomplished easier from deck with less people. The need to send all hands in one or two watches aloft to reef, or shorten the larger single topsail, was eliminated. This allowed a reduction in crew members needed onboard to handle the ship, an economic advantage for the owners.

The ability to reduce the topsail from the deck, simply by lowering the upper topsail halyard, meant an increase in safe working conditions for the crew as they no longer had to rush aloft in a storm to reef the sail.

The smaller-sized sails meant fewer tear outs and less maintenance of the canvas. The lower topsail was rigged in a way that its connection to the mast was strong enough that the sail could stay up during squally or stormy weather and was usually the last sail to be taken away.

Another invention that proved its usefulness was the brace winch invented by Captain John Jarvis.

This allowed a further reduction in crew as the winch allowed the huge and heavy yards supporting the square sails to be braced around with fewer people than is required with block and tackle alone. This contraption allowed for the bracing to be done with fewer hands at the centreline of the deck as opposed to practically all-hands lined up at the ship’s rails.

Savings in economics and increasing safety seems to be a winning combination and the winch was adopted by most large ocean-going cargo carriers. 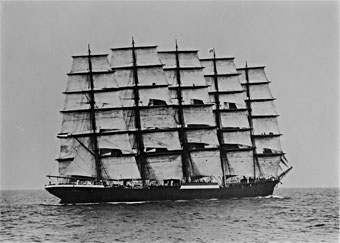 The stronger material allowed massive ships to be built and could carry 4 or 5 masts with several yards on each. With ship-owners ordering steel-hulled ships which were rigged with steel wire and steel spars, winches and capstans to ease the workload of the crew and split topsails, topgallants used for manning reduction and manoeuverability factors, the square-rigger reached it’s pinnacle of development and enjoyed nearly 40 years of dominance before being hopelessly superseded by the motor-driven ship.

The advantages were clear. A ship capable of cruising independent of the wind and current, maintaining speed during calms, able to go between any two ports provided with enough fuel. These ships only had to refuel every so many miles and carry-on even directly into the wind. The construction of the Suez Canal allowed steam-ships to by-pass the large voyage around the African continent on transit between western and eastern markets. Sailing ships on the other hand could not use the canal as there was no room to manoeuvre and had to hire steam-powered tug boats.

Massive ship-building campaigns during the First and Second World Wars added thousands of steam-and diesel-powered ships to the world’s inventory. The need for ships to travel within the confines of a convoy and be relatively unconcerned with the wind when engaged in Trans-oceanic passages were enough reasons to abandon the centuries long evolutionary process that brough us the beautiful clippers and their steel descendants the windjammers.

A few forward-thinking shipping companies retained the idea of sailing ships as a means of carrying cargo and even used these vessels to train cadets as a basis of seamanship. The idea of training youngsters who were entering a sea career aboard traditionally-rigged vessels proved successful and many countries continue to utilize sailing-ships for this reason. Next, we will touch on the Sail Training Vessel and the popularity of Tall Ships.
More about the prototype 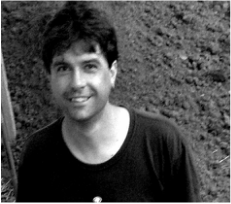