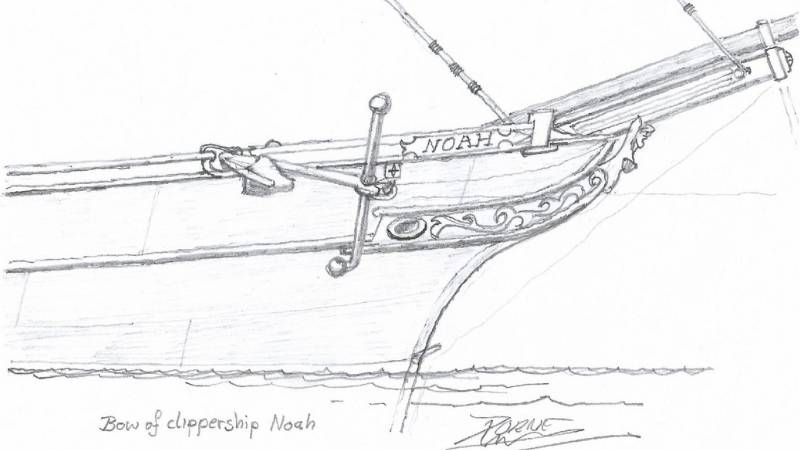 THE SHIPBUILDERS OF ABERDEEN

To learn about the ‘Clipper Bow’ we need to go back to 1839 in Aberdeen.  Here brothers William and James Hall, sons of Alexander Hall of Alexander Hall & Co., Shipbuilders, Footdee, Aberdeen built the first vessel with what became known as the ‘Aberdeen Bow’.  This small vessel is probably one of the most important vessels in the maritime history of Aberdeen.

She was the 2-masted top-sail schooner the Scottish Maid (142 tons) built as a coaster for trade between Aberdeen and London.  It is believed that the Hall’s tested models of vessel hulls adorning this novel bow in a tank of water, and from their analysis designed the new bow, these tests are the earliest tank tests that I’m aware of.

James Hall built a skeleton mock-up of the proposed new bow shape on her hull and presented it to her designated owners, Nicol and Munro of Aberdeen before carrying out the actual construction work.

The Hall brothers duly advised the owners of the advantages:

The lower GRT took advantage of the British tonnage rules introduced in 1835 and saved the shipowners money in harbour and pilot dues.

The new tonnage regulations measured depth and breadth with length measured at half mid-ship depth.  Extra length above this level was tax-free and became a feature of clippers.

The introduction of the ‘Aberdeen Bow’ signified the change from the old wooden sailing coasters to the much sleeker and faster clippers, with hulls, first of wood, then composite (Iron frames and wood planks), and later iron.  The use of composite and iron hulls led to the building of larger vessels.

The term ‘Clipper’ comes from an old horse-racing term ‘Going at a good clip’.

In the 1840’s the British ship-owners and shipbuilders recognised the success of the American built ships and concentrated their efforts to the construction of clipper vessels to rival them.

Some of the American clippers were known to have landed cargoes in a damaged condition, this was something merchants didn’t like, and they encouraged the building of vessels of superior strength, which suited the British builders.

In 1845 Alexander Hall & Co. built the clipper schooner Torrington (237 tons), which proving a great success, was followed by others of larger tonnage.

Shipowners believed economy was in the scale, and the introduction of composite vessels suited them well as this allowed larger and faster vessels to be built.  In 1850, Hall’s built the Stornoway (527 tons), and in 1851 the Chrysolite (570 tons) they proved very fast for their size, but were still no match for the Americans which were double their size.  In 1853, Hall’s built the Cairngorm (980 tons), she proved as fast as the Americans; and due to her superior build quality, she delivered her cargo in good order, thereby being first choice for merchants.   From this date the British built vessels, led by the Aberdeen clippers, gained a great reputation for speed, construction quality, and weatherly qualities, beating the fastest American vessels on long ocean voyages. Hall’s built many clippers during the 1860’s.  Alexander Hall & Co., 1860’s

Aberdeen shipbuilders played a big part in the evolution of the clipper ship.  The 3-masted composite-built ship / tea clipper the Thermopylae (947 tons) was also built at Footdee, Aberdeen by Hall’s neighbour, Walter Hood & Co., for George Thompson’s Aberdeen Line.  8th November 1868, she sailed on her maiden voyage from Gravesend to Hobson’s Bay, Melbourne, in a record-breaking 63 days.  Still the fastest passage on record ever made by a sailing ship.  She was built under special survey

and classed at Lloyds 17A1, the highest symbol of marine quality available at the time.

She was the fastest clipper ship that ever sailed.  She raced the Cutty Sark (963 tons) when they set off 26th June 1872 from Shanghai, China to London, England and Thermopylae came home 9-days ahead.  This was the only occasion they raced home from China.  It is reported that they sailed neck and neck through the China Seas until the Cutty Sark forged ahead.  However, on the 15th August off the coast of South Africa the Cutty Sark lost her rudder.  The ship carpenter made a Jury (temporary) rudder, and Cutty Sark made it home on 19th October.  It is thought that the Cutty Sark could go faster than the Thermopylae in a heavy wind, but it was the superior build quality of the Thermopylae that won on the day.

David R. Macgregor, author of the book titled ‘Clipper Ships’, 1979 / ISBN 0852426186, states in his book that there are four things required to be called a clipper, I would like to add a fifth:

2) An emphasis on streamlined appearance.

4) A daring and skilful master.

5) A vessel designed and built to the highest quality. (My addition).

Basil Lubbock in his book The China Clippers wrote “The great Thermopylae, the pride of the British Merchant service and justly considered by most seamen to have been the fastest sailing ship ever launched”.  Cicely Fox Smith (1882 to 1954) wrote “And of all that fleet of swift and lovely ships, none was perhaps ever built more lovely and more swift than the famous clipper Thermopylae……..There was some secret quality which moved seaman’s heart with emotion of apprehended beauty”.

At this period there was great competition between ship-owners, shipbuilders and shipmasters, they all wanted to have the fastest vessel.