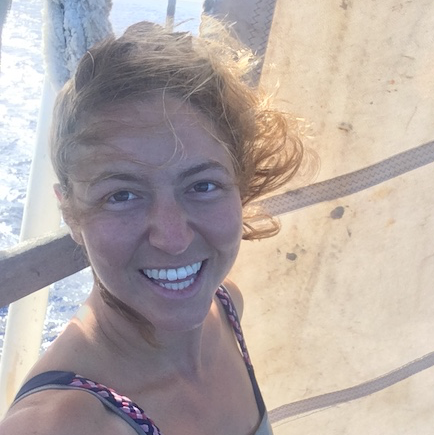 In the Spring of 2020, sailor Shanan Wolfe was the first mate on SV Kwai, a 179 ton cargo topsail ketch. Kwai has been delivering cargo and passengers in the Pacific Ocean, mainly between Hawaii and Kiribati and the Cook Islands, since 2006. The following are excerpts from Shanan’s logs. Learn more about Kwai at http://svkwai.com/ and follow Shanan’s adventures on Instagram @the_mangowolfe

“Blue marching hills and valleys everywhere and a heavily laden ship that rolls back and forth, making steady progress south. Sometimes on the top of a wave, sometimes so low that we look up at walls of blue, blue water. Two days of sustained 20 + knot wind has built up the sea state, and the ocean washes over the boat as well as surrounds it. We are lucky we are in the tropics! The boys took baths in the leeward scuppers, and when we hear the occasional wave break over the backdeck we all automatically lift our feet while sitting at the table and watch the water race across the deck below us. The cook is praying to Poseidon by throwing freshly baked muffins out the porthole. We are all very jealous of Poseidon, but mollified by the reminder of last night’s fudge. The boys are also supplementing with midnight snacks of fresh flying fish…”

“We were at Washington Island today. The most remote of the Kiribati Line islands, it has a reef ringing the island that is broken in one spot, and that one spot is the only place to get small boats to and from the shore. ( It was dynamited.) We managed to anchor this time (last time the anchor wouldn’t hold and the Captain kept us drifting in place for two days while we unloaded cargo.) This time we lucked out— our anchor held and offloading the 150 drums of petrol into bouncing small boats wasn’t the near-impossible mission it was the first time around. As the drums and other cargo went ashore and space started clearing on deck and in the hold, the small boats started bringing heavy bags of Copra on the return trips, and as one side of the hold emptied we packed it with Copra instead. (Copra is dried coconut, Kiribati’s main export.) Operations were running smoothly and I was given leave to go to shore for a bit— first time I’d set foot on Washington island, despite having delivered cargo here last trip as well. It is BEAUTIFUL. Blue sea and reef giving way to a line of white beach which turns into dense verdant undergrowth. Green grasses in the clearings under arcing coconut palms. The palms are so dense in places it is almost dark under them, their roots drinking from canals of brackish water that reflect the sky. Back at the loading spot maybe 30 kids were playing semi naked in the water, a huge gang of them getting in the way of the small boats running cargo, shrieking and having a great time. They all came running when I took a picture, and then climbed aboard my boat when I caught a lift back to the ship. I teased them that they were strong and would help us unload, and then had to deal with getting 20 flexing ten year olds off the boat. Ooops!…”