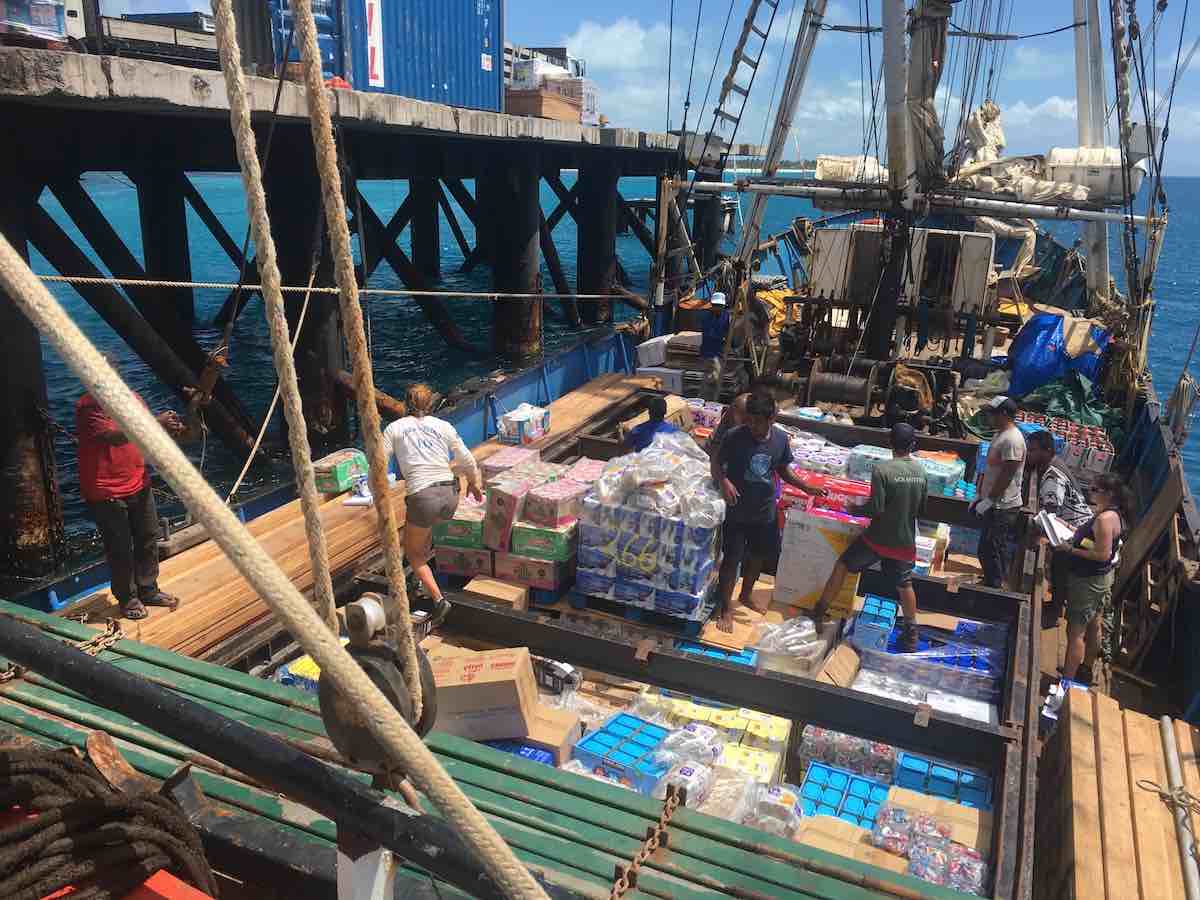 In the Spring of 2020, sailor Shanan Wolfe was the first mate on SV Kwai, a 179 ton cargo topsail ketch. Kwai has been delivering cargo and passengers in the Pacific Ocean, mainly between Hawaii and Kiribati and the Cook Islands, since 2006. The following are excerpts from Shanan’s logs. Learn more about Kwai at http://svkwai.com/ and follow Shanan’s adventures on Instagram @the_mangowolfe

“…We are on a breakneck schedule of 12+ hour days, and I bounce between overseeing discharging and stowing cargo and sewing the massive rip in our mizzen sail that happened on the 8 day trip down from Honolulu…

…Christmas Island in the Kiribati Line Islands, where the airport is in a town called Banana, but London is right down the road and Paris is just across the bridge. If you feel like a drive you can hit Tennessee and Poland on your drive around the island. Pool is very big here, and, I kid you not, karaoke. I am on the aft deck right now, and the Kiribati have a mic hooked up to a speaker and are doing karaoke. Karaoke at night while underway under a sky full of stars… a completely random experience;  an incredible one. After much urging I sang rousing renditions of Mama Mia and Hotel California….”

“…And the week since flew past, charged and urgent like a seagull after fish scraps, full of loading, repairs and what personal time could be snatched for the internet and shopping. After arriving in Hawaii we had most of a day off, and then woke at 0400 the next day to head over to Pier 19 for loading Cargo. We loaded the entire hold (346 cubic meters of cargo) as well as 240 empty drums on deck in a record 7 hours, managing to finish by 1400. This was the only day we could load, and the double rush was because the stevedores (dock side cargo handlers) had a union meeting at 1400. We got all cargo onboard by the deadline (slipping away one at a time for a hurried lunch), spent the next few hours organizing and lashing, and headed back over to our dock at sunset. It was a long day….”

“…Meanwhile, my reality, the reality of sunrises and sunsets over tropical islands and endless horizons, the reality of the constant noise and music and laughter and singing of Kiribati Culture, the reality of being so filthy at the end of each day I take my clothes into the shower with me to rinse them out (my work “uniform” consists of one pair of shorts, two shirts that I swap out, a buff, hat, sunnies, shoes, and massive amounts of sunscreen. My work clothes are a loss so I wear the same thing day in and day out to save my other clothes!), soap liberally to try to keep staff infection free, soap all of my injuries again, and then have all the still dirty spots on my body— grease streaks on the backs of my arms and such— chidingly pointed out to me upon leaving the shower.

The reality of a cabin that is so hot that my chocolate stash is a melted ruin, and if I didn’t have a fan at night I would be in a puddle of sweat.

The reality of rain showers and millions of stars.

The reality of waking up each morning and being ready to spend the next 12 hours creating order out of chaos as myself and 8-12 Kiribati guys with varying levels of English play Tetris loading and unloading the ship of everything from USB cards to 40 tons of copra to 300 drums of petrol to 100 boxes of diapers. Flour. Soda. Car batteries. Bikes and chips and suitcases and candy and computers. Lumber and 1,000 lbs clothing bales. Tires and washing machines and socks.

The reality of sailing goods across the ocean to people who don’t have a Walmart right around the corner.

The reality of hearing dolphins breathe around the boat at night.”