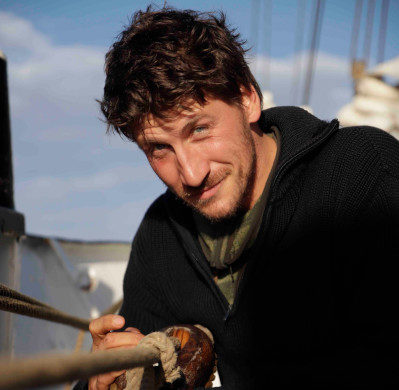 Ahoy, my name is Martin and I‘m a cargo sailing ambassador. When I started to sail tall ships at the age of 16 on a three-masted tops’l schooner, I immediately plunged into that compact yet profound universe of knowledge and craftsmanship. I wanted nothing less than to live out there on the oceans for a while, battle the roaring seas, climb the sky high masts and sleep under the ascending stars. My voyages became longer and I got accustomed to the ships and their calming rhythm of watch and rest.

I had read about clippers that carried cargo from shore to shore all across the world – giants under sail flying enormous amounts of white canvas. A sailor‘s dream. But that was a hundred years ago and I deemed myself unlucky for being born into the wrong ages.

Until in 2012 when I found this dream being sparked again by a brave Dutch company with a single vision: To bring back sailing cargo.

That company was Fairtransport and when I arrived in Den Helder two years later I had already quit my job, sold my possessions and was ready to embrace the change that was surely coming to the world of cargo shipping.

I think the reason I so gladly stepped into this adventure is that this world of ours utterly needs to see some change. We just can‘t carry on like that anymore – consuming and polluting this planet as well as our very selves every day. And at first I was in doubt if such substantial change could be made possible by some enthusiastic individuals without big players or politics pulling the same line. But during travels I found that it was up to me to make that change happen because here it starts – with every single one of us. What do I buy, where do I buy it and first of all: Do I really need all that stuff?! So I got myself involved with several companies and made my sailor’s dream come true: building and sailing wind-powered cargo vessels. Out there on the oceans I simply enjoy the things we do with our ships and crews. Sailing with little or no use of engines, training people in the art of seamanship and contributing our share by hollering out a simple truth:

We can change maritime shipping if we really want to. Because the wind blows strong out here on the oceans and it is free for all.