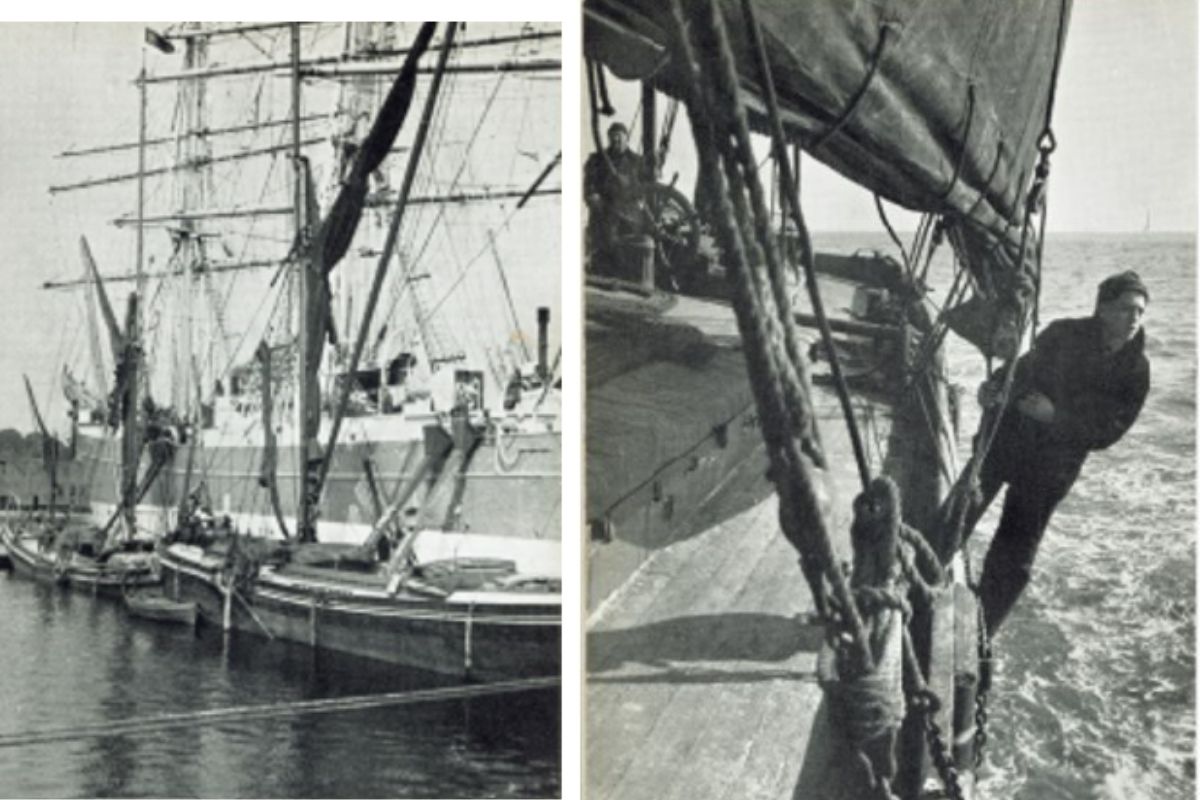 — the Clipper and the Coaster

Some thoughts on the future of sail powered freight, inspired by the past.

The photograph is from a book I bought in 1972, “Down Tops’l” by Hervey Benham. First published some 70 years ago, it tells the story of the Thames Barges.

The humble Thames Barges carried anything – grain, sand, bricks, and vegetables along the coast and up the smallest rivers. With holds full, up to 90 tonnes, they were sailed by a man and a “boy” – usually a hulk of a teenager, although the coastal barges had an extra hand – luxury!

1939, my father was about to join the navy and face the ferocity of the North Atlantic convoys. He survived and exactly 9 months after the war ended my current life began. So you could say I have salt in my veins but actually, we all do, almost exactly the same percentage as in seawater, no wonder we are all drawn to the ocean.

Fast forward 80 years and we’re turning full circle. Faced with the industrial greed machine that is destroying our society, we have no option but to look anew at sail and sun rather than smoke and sump oil. The good news is that some of the best maritime minds are on to the job and the modern clipper is on the drawing board, ready to go.

The illustrious DNA of the 19th century Dutch clipper “Noach” will live again in the EcoClipper. She too will sail with the trade winds to the hubs of the “hub and wheel” system and discharge her cargo on to smaller feeder ships – the Thames Barges of the 21ist century. Her little sisters will once again make fast under her towering spars to receive cargos bound for those small ports and wharves. Grain? Perhaps, coffee, rum, pepper, electric bikes and all things hempen, certainly.

New clippers, however, are not cheap, not readily available and they’ll need an experienced crew of 30 or 40 to sail them. Fortunately sail training never died, and there’s no diesels to buy, feed and maintain, instead there’s abundant wind and sun for sail and solar. In short, the clipper, the modern Windjammer, is once again a viable proposition.

Now I’m not suggesting it’s feasible to power container ships with canvas but there’s an army of innovators looking at alternatives, just look at what the IWSA members are doing. With smaller ships it’s easier and at Go Sail Cargo we choose evolution rather than revolution, and let’s face it, the world needs clean new coasters just as much as the clippers. Evolution. Consider the Cutty Sark of 1870, manned by a crew of 35, she loaded 1,300 tonnes of tea whereas the Mighty Preussen, 30 years later, had a crew of 45, maybe 50, but carried 8,000 tonnes of nitrate from Peru. That’s progress, steam winches, water ballast, steel stays and all.

So that’s our challenge: to usher in the renaissance of sail.  We will need to make use of all sensible and applicable technology to make it pay. Our hull shapes will be optimised, the rigs fine-tuned, and the age old conflict of speed versus cargo capacity will be reconciled with workable compromises. With our mini-clippers we’ll incorporate hull friction reduction systems, pitch and roll damping, and windward water ballast to reduce heel on passage. In sheltered waters we can tow our own mini-lighters with extra cargo, perhaps to be dropped off and picked up later. Towing under sail works – I’ve done it on a small scale, and remote controlled electric outboards can be deployed to brake or steer the lighters.

In addition to cargos, the modern clippers, large and small, will need to attract paying passengers, or free deck hands, as we call them, but that’s for another post. These days though, it’s a case of clouds of white canvas, free Wi-Fi and a decent bowsprit to selfie on.

There is, however, an elephant in the room, or should I say wheelhouse – cargo handling. We just have to get it right. Ashore the key is a well-tuned computer-driven logistic system. The city of New York, for instance, needs a minimum of 50,000 tonnes of food every day, 7 days a week, so you can’t stuff around, can you? On our boats the main gaff doubles as a crane with a heavy duty mainsheet traveller for the hook. The winches will be synchronised and programmed so the hook can be laser guided to hover over the correct pallet for the right destination. The shipper, the customer, and the cargo handlers can all be confident. This kind of gaff/crane is not workable with a square rigger – the most efficient sailplan for the trade winds – so separate derricks would be installed to transfer freight from clipper to coaster.

Unfortunately there’s another elephant – we’re going to need a bigger wheelhouse – containers, and no, they don’t fit on sailing ships very well and I can’t see any way we can fit cranes sturdy enough to handle them either. We’ll just have to plan our voyages around container-friendly ports. Can’t live with ‘em, can’t live without ‘em.

Elephants aside, an updated version of the 1939 methodology applied to mass production translates pretty well to our Brave New World and enough good people plus savvy shareholders will make it happen. 21st century clippers will work with nature, not against her and importantly, a well found sailing ship should be a thing of beauty. Her arrival on distant shores will be eagerly awaited, not just for her valuable cargo, but for the simple joy of watching her sail in.