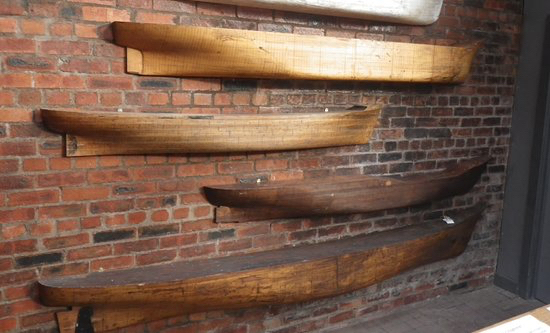 What does it mean, this ‘lofting’? A black art that used to be guarded jealously and was the domain of only the master shipwright.

A small word which means a lot to anyone who knows anything about the nature of working on boats, ships or aircraft. Now considered a somewhat lost “Art” due to the introduction of computers in the design world of engineering and surface shapes.

Information that was at one time only available and indeed known by a very select few is now referred to by a few naval architects, mostly in the smaller boat building world. Here any good designer would still wish to see his or hers lines on a larger scale than shown on a drawing. It is only when scaled up that the small irregularities of a design will show, the eye is far more accurate than any computer when it comes to showing a fair line.

The start point for the master shipwright, a scale model carved in pine. Dimensions taken from this formed the full size ship, as preliminary offsets were created. By the 17th century all ships started out as a half block model, usually the Starboard side as Port side would be an exact opposite.

The table of numbers taken from the half block model. Not used for production until the Loftsman had run and faired them as ships lines, to produce the three views that form the Lofting.

The method of proving the form of the ship before building can begin. Finished lines plan, with finished faired offsets, means the shapes can be formed in the knowledge that they will all fit. The means of creating a 3D vision using 2D information.

Meaning a hull made of formed iron frames sheathed in traditional wooden planks, with a copper bottom cover to keep marine growth away.

Computer Aided Design, the way most ships are designed today. It does not mean that you should not be aware of Lofting. Trusting only the CAD system can lead to problems.

When one looks at the beautiful and functional shapes of the clipper ships from the early 18th century through to circa 1875, although  steam was taking over, such vessels still had their place. For a long time such wind powered ships held the upper hand when it came to load capacity and speed.

Most of these fast clipper ships were designated as composite build, meaning that they had a frame of iron, but the hull was sheathed in timber.  The composite build would also contain a partly geodesic design, with longitudinal stiffeners placed fore and aft at an angle almost like the geodesic design of much later and future aeroplanes that Britain sent to war in 1939.

While many true lengths could be lifted from the horned frames on the building berth, it was much better to have the full size lines of the vessel laid out on the mould Loft floor. It was the job of the Loft to guarantee that the ship’s lines were fair and true before any building commenced.

The iron frames could only be formed after being laid down on the Loft floor, as they required to be formed in three dimensional space.

An angle iron bar had a flange that required bending to the bevel of the hull shape. The transverse shape required it to be formed to take the body plan frame shapes. This is the shape that you would be familiar with if you looked straight onto the bow of the ship, on one side; the other side is viewed from the mid-ships looking aft.

Noach Body Plan (Stations lines only) this is a preliminary stage and the Body plan will require to be fully faired at every frame line. Something that most capable CAD systems will do in minutes, in the old days the Loftsman would spend many days to accomplish this.

As you can see from the preliminary Body Plan of Noach, a very fast Dutch Clipper ship, from days gone by.