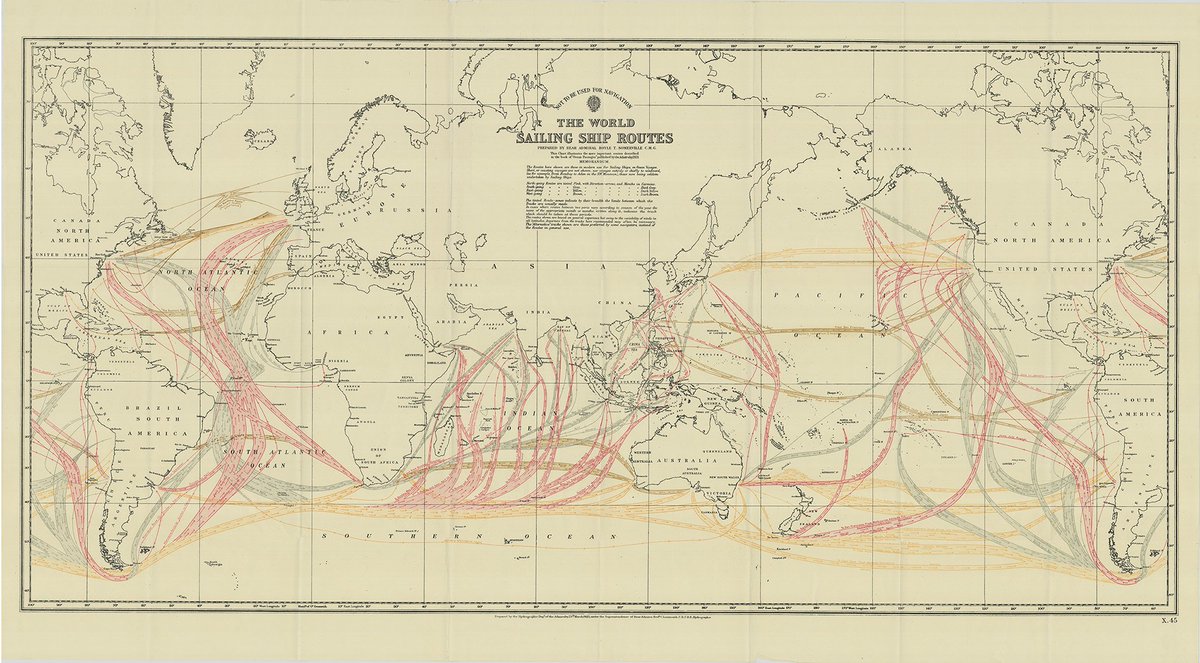 If you follow EcoClipper, you’ve probably heard the term “Trade Routes” mentioned quite a lot! And while they’re quite simply the route a ship takes while carrying traded cargo, there’s a lot more to them than you might think!

People have been building boats for fishing and transport since around the beginning of civilisation. Archaeologists are confident that the remains of a stone age structure discovered off the Isle of Weight was probably an early boatyard, which is well placed when you consider that the Solent is one of the busiest shipping channels in the world today.

There is evidence that communities traded goods such as spices, fabrics and precious metals long distances by boat at least two millennia ago in what were essentially canoes, but ocean trade really became viable with developments in boatbuilding by Austronesian peoples, such as multihulls, outriggers and crab claw sails. Over time, they found some routes were faster and more favourable than others, creating the maritime trade routes into South Asia and the Arabian Sea, which would later become the Maritime Silk Road.

Over time, as merchants from around the world took to the sea to join in with global trade, “local” favourable routes merged and expanded. Bigger boats were developed to carry more cargo and their sails were refined for mainly downwind sailing (same direction as the wind). By the 15th Century, prevailing wind patterns and ocean currents were better understood and were utilised to transport ships and their goods quickly, essentially joining the routes that would carry and blow them to their destination.

Today, we understand this phenomenon as the Coriolis Effect. The equator is heated more intensely than elsewhere around the globe. Air passing over this hot area rises, creating a constant area of Low Pressure at the equator. Air is drawn in from the cooler surrounding areas to replace the rising air, which is itself warmed and rises as it travels towards the equator. The warm, high-up air is in turn drawn away from the equator, cooling and falling on its way, creating areas of High Pressure at around 30° North and 30° South, before starting the cycle again. The rotation of the earth causes these cycles to curve from East to West, which we call Easterlies, or Trade Winds.

This area between the equator and 30° in each hemisphere are called the Hadley Cells. A similar effect is observed in the two Polar regions, or Polar Cells. The cold poles are constant areas of High Pressure and air moves in a cycle from them towards the equator, heating and rising to a peak at around 60° in each hemisphere before cycling back and again, moving towards the East – the Polar Easterlies. The areas between the Hadley Cells and the Polar Cells are the Ferrel Cells. These move in the opposite direction, like a cog in between two others, causing the winds to move from West to East, or “Westerlies”.

There is an excellent, in depth explanation on the Met Office website

As the global wind systems move across the sea, they drag the surface water along with it, causing it to move in the same direction as the wind. The Coriolis Effect comes into play once again, deflecting surface ocean currents to the right in a clockwise spiral in the Northern Hemisphere and vice-versa in the South. These spiraling currents are called “gyres”.

As the waters of the Northern and Southern hemispheres reach land, most of the water is deflected outwards towards the poles. In the waters either side of the equator, some of the water is forced inwards and runs in a stream between the Northern and Southern currents along the equator. This is called Equatorial Counter Current. An in-depth look into Counter Currents is out of the scope of this blog, but I encourage you to watch this video to find out more as the process is amazing!

The Trade Winds along with their associated ocean currents define the route ships sail to reach their destination. From the UK to Asia for example, ships would sail South down the West coast of Africa, across to the Americas, South along the South American coast and then East toward Asia.

By the 1800’s, the use of “Old World” Trade Routes and sailing cargo ships was declining as industrial advancements saw more and more vessels being powered by engines, allowing more direct routes to be taken. And while getting from A to B faster may seem like good news for merchants, with time we have learned that the ecological effects of this “advancement” has been devastating. The bigger these engine-powered ships become, the more fossil fuels are needed to power them, producing more pollution in the air and sea. Engine noise from these vessels impacts migration routes of whales and lost cargo containers from over crowded freight carriers – an average of nearly 1400 every year – can have fatal consequences for other seafarers and marine life.

The International Maritime Organization (IMO) recognised that this mega-shipping model is not ecologically sustainable and in 2015, 193 countries adopted the IMO’s ‘2030 Agenda for Sustainable Development’ – a plan to reduce fossil fuel consumption and operate in a more environmentally friendly way. But as of Feb 2021 many shipping operators are struggling to meet their emissions targets.

Over the last decade there has been substantial increase in environmentally focused shipping efforts. “Sail Cargo” companies are once again utilising the Trade Routes of yesteryear with sailing vessels that use nothing but the wind and ocean currents to travel the world, emissions-free. EcoClipper is proud to be joining this evolving industry. To find out more about the Sail Cargo revolution click here…